Here's what I did with twiggy and friends 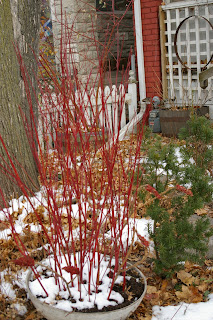 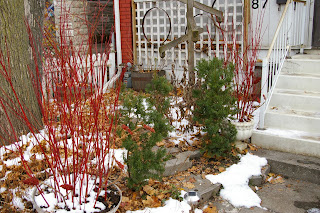 OK - so I haven;t been back to the county and probably won't get there for another month or sop. But here's what I did with all the twigs I brought back earlier this week.

These photos didn't align themselves as I had hoped but that's ok for a first attempt! Wanted to write about how I'm trying to protect some young shrubs from the varmints this winter. For the past two years when I've gone to the County in spring I find my corkscrew hazel has provided several meals to what I'm guessing is rabbits - the fattening buds are bitten off. The plant has grown back - just takes longer and doesn't get as big every year as it should. This year I cut off buckthorn branches and shoved them into the ground around the witch hazel. I hope the thorns will deter rabbits (and, possibly, deer) just as they detered cows and sheep in the 19th century when the shrubs were brought over from Europe to use as hedgerows. Hate them buckthorns - but that's a subject for another post!

I tried the same thing here in the city this year too - bringing back buckthorn branches (ouch!!) to surround two varieties of big leaved Magnolia I've grown from seed. Last spring I went out to the allotment garden where I'm growing them and their buds had been nipped off too. This year, thanks to I think how wet it was, they grew like crazy - adding at least two feet even from the new shoots below the eaten tops. I have to start thinking about digging them out and finding a spot to put them in the County! I'll try to get some pix next weekend and post them here.
Posted by County Gardening at 4:18 PM No comments:

Drove out to the property yesterday just to finish a few things for the year and take some pix here and there but unfortunately both sets of camera batteries were dead. So. Imagine my field (which is in front of the garden areas) like this, but with the grass mainly brown with patchy white (for snow) and with a clear view of the road at the end because All The Leaves Are Gone (cue music to the Mamas and Papas).

Here are my impressions.

It was cold. And windy. And brown. Snow on the ground here and there. Winter has definitely arrived. I drained and stored the rain barrels after first punching through about an inch of ice, then cut an armful of year old dogwood sprouts. They're perfect - last winter I cut down a whole bush and this year dozens of new shoots came up - some as high as three or four feet. I cut down about 3/4 of them (never wanted a bush in that spot but it came with the property) for winter urns back in Toronto. Forgot to bring back pine boughs though...

I'm going to start doing that with a bunch of dogwood - I guess it's red Osier - next year so that every winter I have a supply of beautiful red and straight branches to decorate with.
Posted by County Gardening at 10:49 AM No comments:

...and I'm having fun with it! I still need to either find a way to shrink an existing photo to show up smaller on the page or to shrink 'em when I download onto my computer from my camera..give me time!

I live in Toronto but have property near Hillier, in Prince Edward County, Ontario, which is about a Canadian zone 6 - the colder or 6a or 6b - I think that's zone 5 something in the States. One day I'll have a house there but right now there's just loads of gardens, and I'll be posting thoughts and photos on this blog about what it's like to garden in such a beautiful area without being able to actually live there.

Stay tuned!
Posted by County Gardening at 11:45 AM No comments: